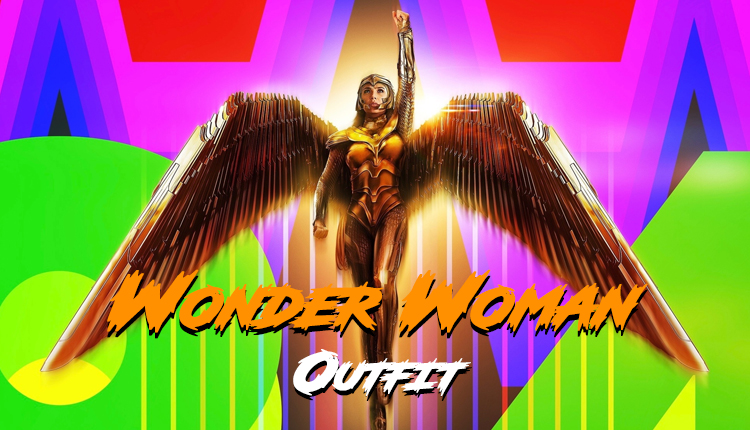 There was a time when people believed that only men can fill the position of superheroes. DC Comics has always introduced its audience with the best and strong characters that proved to be iconic superheroes and idolized personalities for the fans. But DC Comics ensured to prove, that women hold the same capabilities, as men. Wonder Woman – the fictional superheroine, who won over a million hearts and stood up along with the male superheroes. She is the woman, in whom people believe. The character of Wonder Woman drew inspiration for every woman out there.

The origin of Wonder Woman was portrayed as she was sculpted by her mother, from clay. She was given the gift of life and was allowed to live in Amazon, with the superhuman powers as gifts by the Greek Gods. Later on, her original depiction has been altered and she has been losing her powers entirely by the 1960s. The character of Wonder Woman is an inspirational one for young girls and women. On the screen, she carries the dual personality of Diana Prince and Wonder Woman. She is defined as a strong and competent character who is strong-willed and doesn’t back off any critical situation. She is always up for a fight or challenge which threatens humanity. She is a lover of peace and never initiates a fight or a conflict. As powerful and determined Wonder Woman is, along with her powerful capabilities, training, and experiences of centuries – she is competent enough to fight against any superhero or villain. She is a warrior. As highly compassionate and determined she is, she can be naïve and innocent at times, which defines the purity of her character. Her character is also emotional, as she is a firm believer in love, compassion, and empathy. She is a nurturer of humanity with an overwhelming belief in love.

Along with the classic representation of a strong and independent character, Wonder Woman is also adored for the way she holds her personality. Be it the way she fights against evil, protects humanity, or carries herself. As a fan of Wonder Woman, you know what I’m talking about. Be it Diana or Wonder Woman, the woman knows how to flaunt away with her costume. Wonder Woman 1984 Costume is surely appealing and breathtaking. The gorgeous character of Wonder Woman is embraced with beauty and competence with the costume that she is attired with. The costume that she is attired with on the screen, is similar to her Marston costume. She is dressed up in a vest and a skirt, with the color combination of maroon, blue, and yellow highlights. She carries a sword and a shield that has a completely new origin. As she was given her powers back and she returned to her title of Wonder Woman, she came back to her traditional costume of a superhero and slew in it. Her attire is attractive and surely every girl has a crush on it. 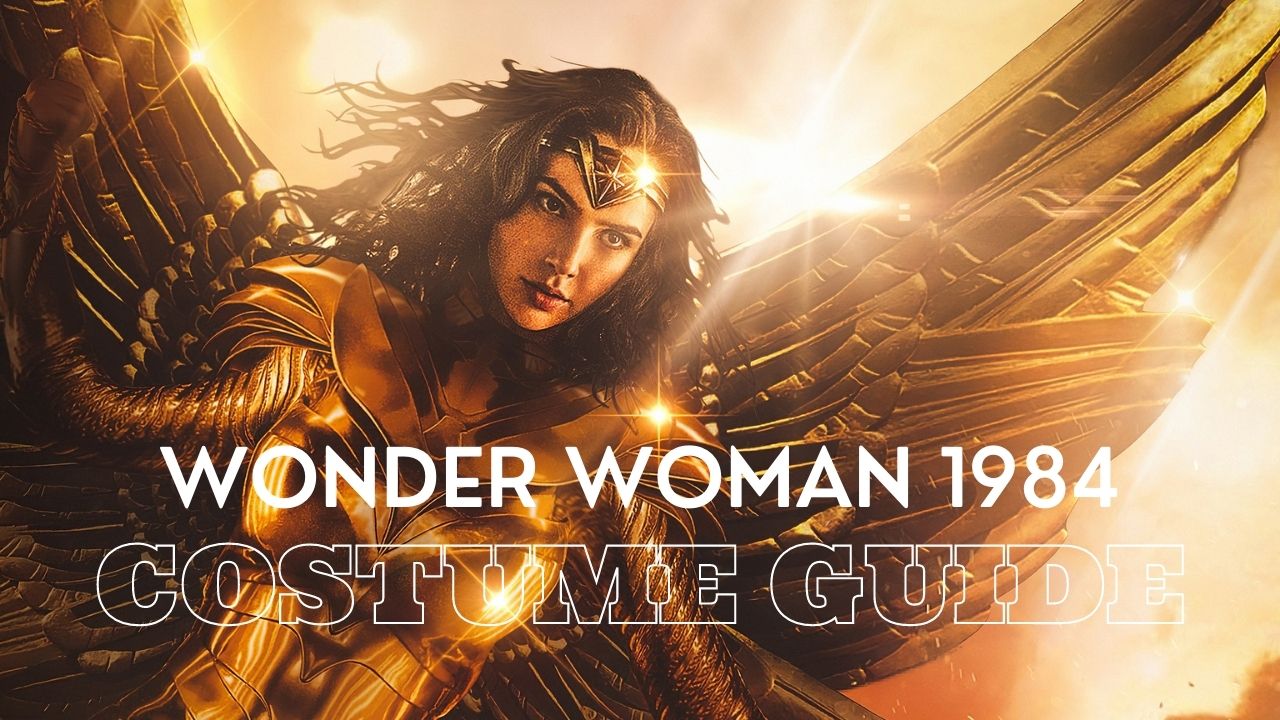 Gal Gadot / Diana / Wonder Woman in Justice League – was one of the apprehensive characters that the audience loved to watch on the screen. She is an antiquities dealer, an acquaintance of Batman (Bruce Wayne), and an immortal Amazonian warrior. The crown princess of Themyscira and daughter of Hippolyta and Zeus. She is empowered with metahuman attributes and abilities which she originally inherited from her parents. Wonder woman has been an action figure in Justice League, where she stood up to fight against evil and protect humanity. She showed her compassion for justice and the people of the town.

Gal Gadot / Diana in Wonder Woman – the immortal Amazonian warrior and goddess has given Amazon a raise as being the daughter of Hippolyta and Zeus. Wonder Woman is described as a compassionate woman with a heart filled with love. She is portrayed as a strong and competent woman in the movie. She stands for what is right and for everything that she symbolizes. Diana has a quite fair opinion, which falls upon agreeing on the gender difference and how women are not equal to men.

The fictional character of Wonder Woman is an inspiration for every woman who stands for humanity. She has a firm belief in love and empathy, which makes her competent enough to stand for what she believes in. As she is a warrior born and stands for what is right. She is a woman with superhuman strength, which makes her as strong as Earth and stronger than Hercules. Girl power has been empowered with the character of Wonder Woman. She is granted superhuman speed, which makes her fast enough to keep her pace with the Flash. Along with strength and speed, she is empowered with flight, reflexes, and stamina. She has a loving heart and gorgeous beauty. With her bracelets, she knows how to emit a devastating magic lightning attack. She is an entire package of beauty and brains. She carries her character with a gorgeous portrayal. Her attire is another attraction of her personality. With that gorgeous Gal Gadot Wonder Woman Costume– she makes herself look better on the screen. Her boots, gloves, cuffs, and tiara; defines her character as competent as she is. Check out the details of the Wonder Woman Costume:

To imitate the personality of an immortal Amazon warrior goddess, you can grab onto this iconic costume that Wonder Woman has been attired within Justice League. The costume is made of PU leather. It comprises of a vest and a skirt, fashioned with a belt. The color combination of maroon and navy blue is a perfect replica of the original one. 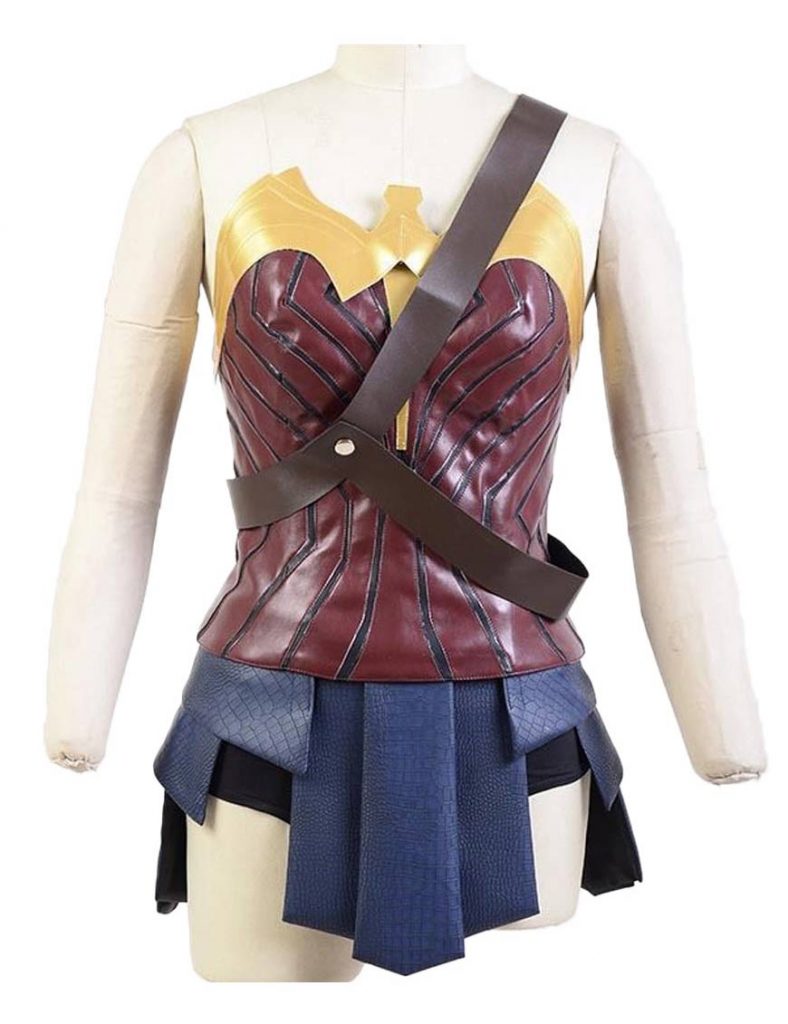 The jacket is inspired by the look that Adrianne Palicki was attired within Wonder Woman, an unaired television pilot. The jacket is made of genuine leather / faux leather with a soft viscose lining on the inner side. The jacket is available in maroon with the Wonder Woman logo at the front. The blue hemline, full sleeves with star patches on biceps, and fine stitching make the attire appealing. 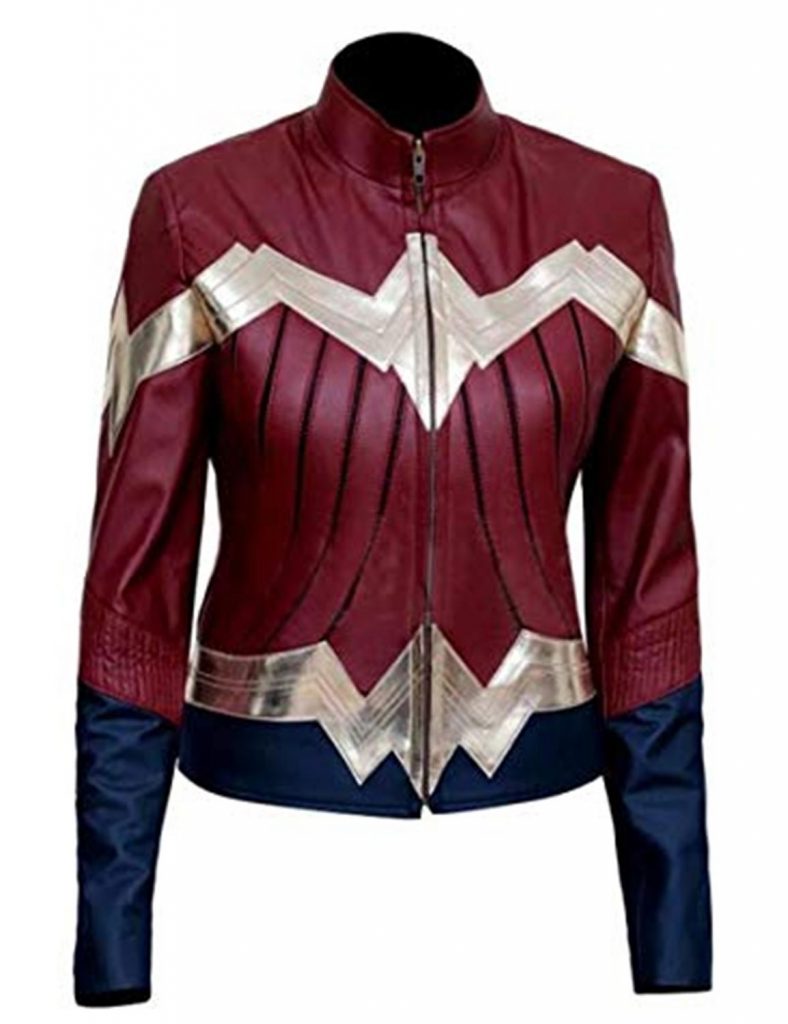 Wonder woman’s cloak is a must to have. This eye-catching and gorgeous cloak is constructed from wool blended material and is further lined with soft viscose fabric lining on the inner side. On the external side of the cloak, the fur lining on the open front border, wide spread collar, and cuffs are simply aesthetic. The black color ensures to highlight the wonder woman costume underneath. 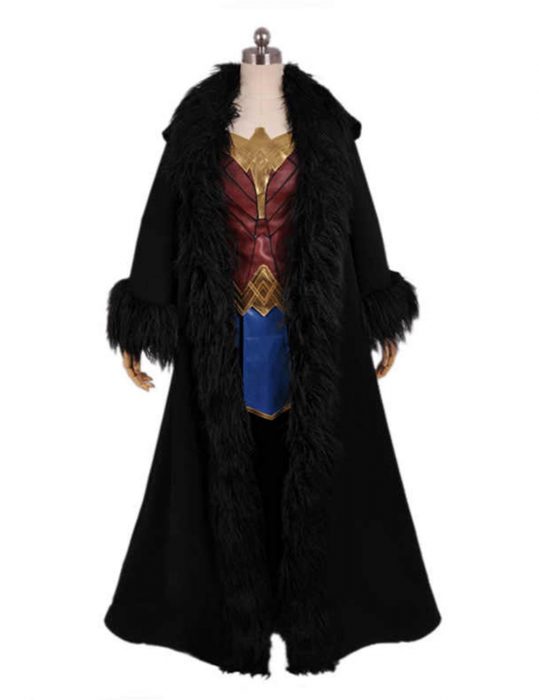 If you want the same elegance and style as the gorgeous Gal Gadot, don’t forget to check out this new and trendy coat worn by her. The fabric is a wool blend with a soft inner viscose lining. It has a notch lapel collar, a front open style, long sleeves with buttoned cuffs, and a gorgeous smoke grey color. It has one welted waist pocket and one chest pocket on the front. The design of the coat is what makes it so appealing along with the comfortable fabric that could be worn anywhere and anytime. 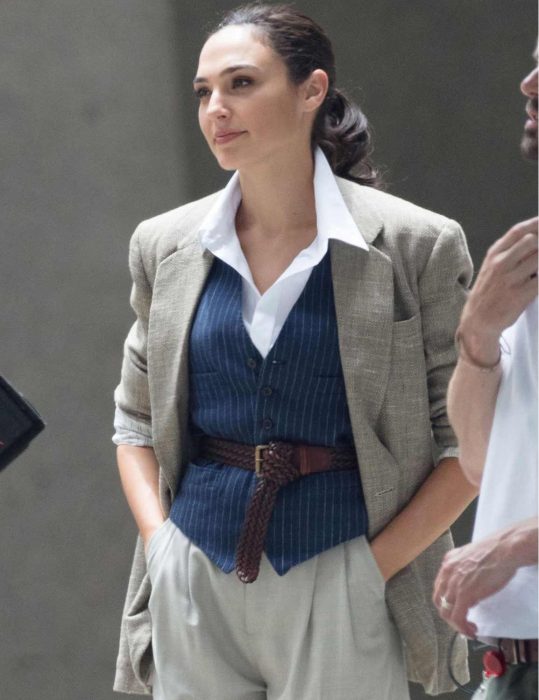 Who wouldn’t want to grab onto an attire that embraces the manhood of the divine goddess, Wonder Woman? Get this black hoodie, with the logo of Wonder Woman imprinted at the chest in yellow, to cherish the fandom you hold for Wonder Woman. The combination of polyester and cotton will feel amazing against your skin. The hood is attached with a lace-up closure. 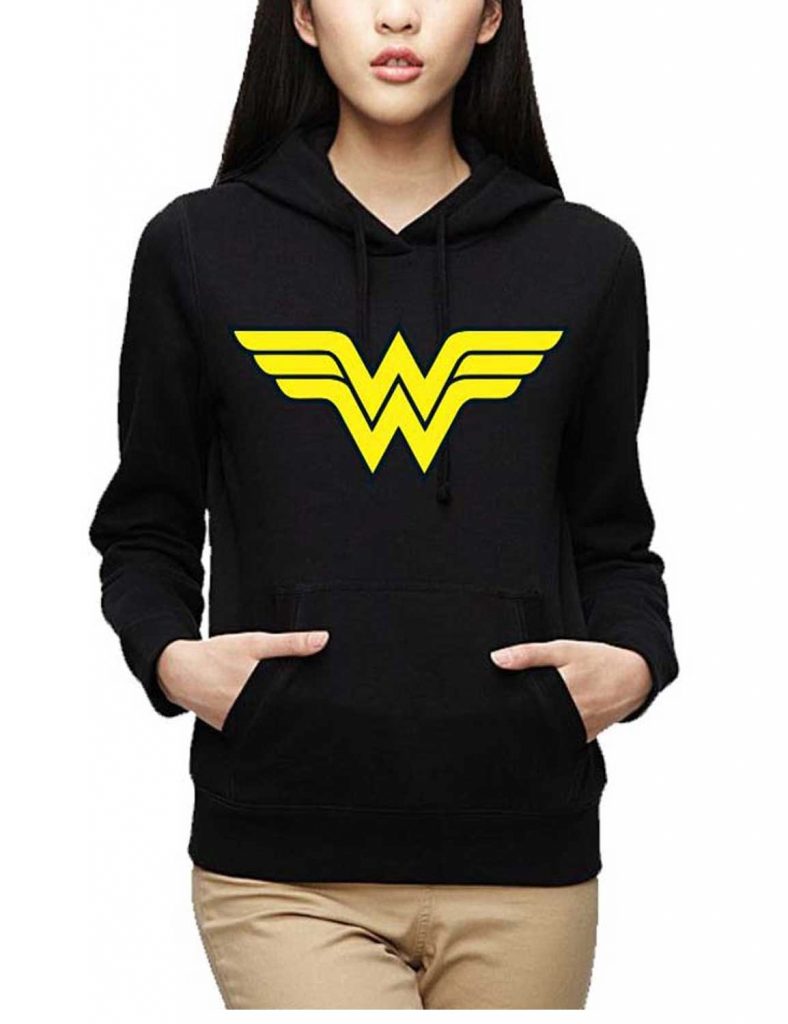 As to imitate the entire look that Wonder Woman has been carrying on the screen, while serving humanity with her immortality, you must get your hands on the accessories that complete her look. The Wonder Woman cuffs and tiara is what you need to add to your outfit. The synthetic accessories have a pull-on closure and are inspired by Wonder Woman. 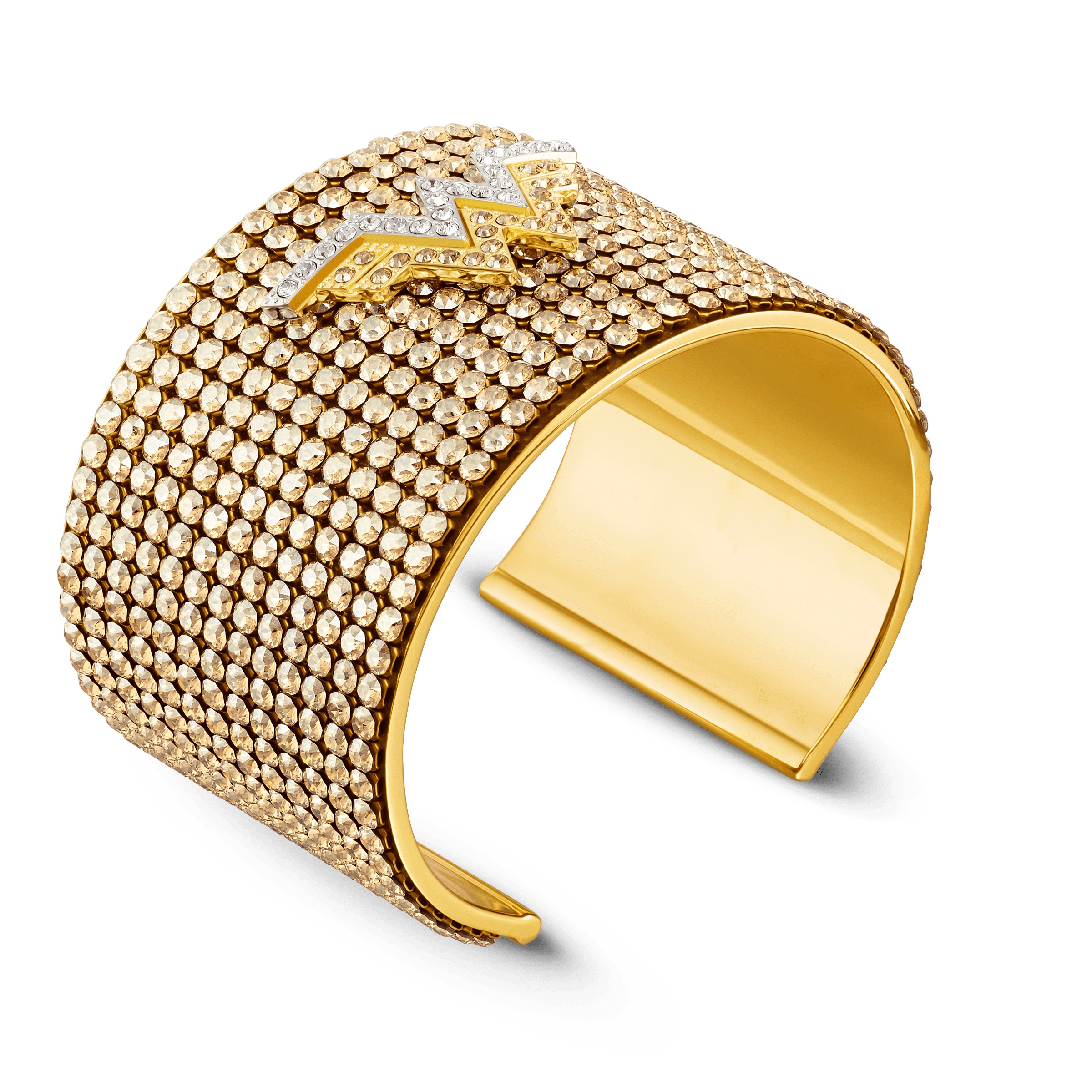 The head tiara that embraces wonder woman with an empowered look, is now available for you to grab on. The tiara is constructed from high-quality metal that is lightweight by sturdy. The headband has an elastic waistband closure that ensures to fit any head size without any pressure. Let this headband empower you! 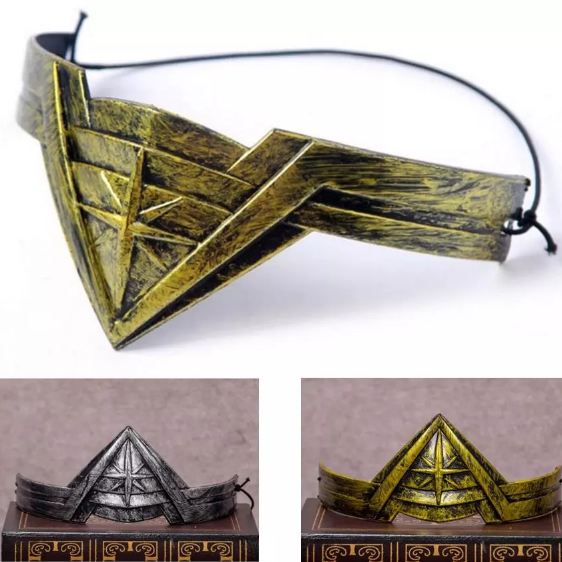 How classy would you look, with the costume of Wonder Woman and every essential accessory which is required to replicate her entire look? The gold-colored gauntlets that Wonder Woman has been attired with, are something that you need to have right away. These are made of 100% polyester with a red star imprinted on the wrist. 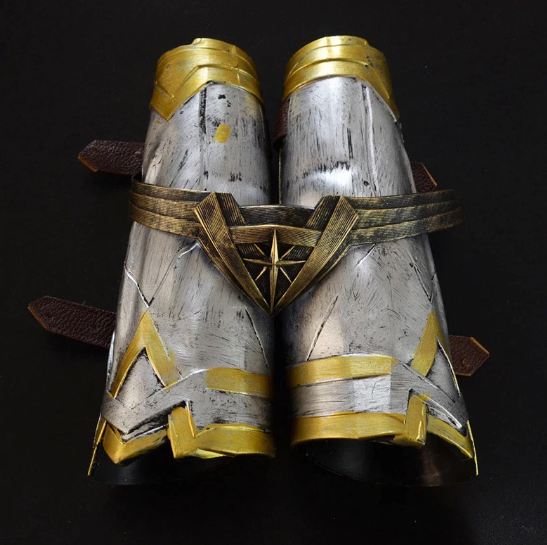 As the footwear of superheroes is quite important, due to their rushing moves, the footwear that Wonder Woman has been attired with, are 100% man-made boots. The boots have a rubber sole and offer comfort along with durability. 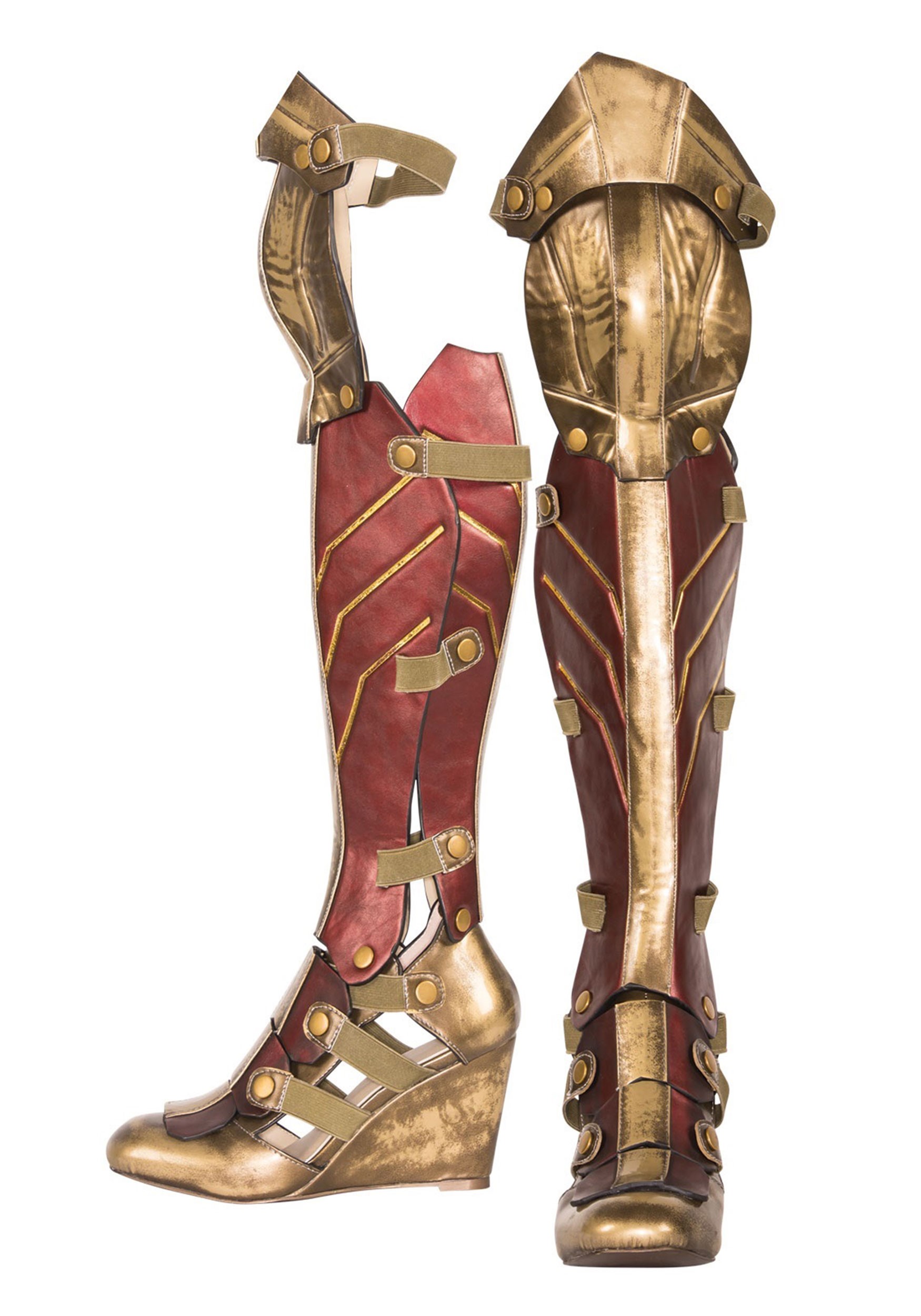