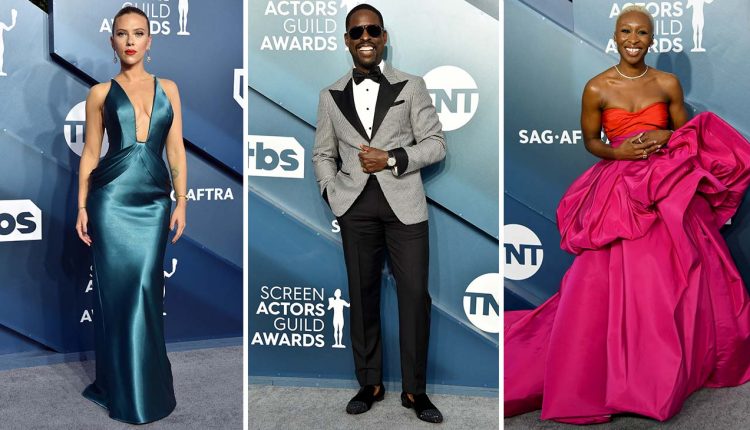 SAG Awards refer to the Screen Actors Guild Awards. This is one of the most important and biggest events in Hollywood since 1995. These awards are given by Screen Actor Guild American Federation of Television and Radio Artists (SAG-AFTRA). The award which is given to the stars is of a nude male statue holding two masks, one representing comedy and the other one representing tragedy, this is called “The Actor”. This award is given to the one who has given the most amazing performance in the film as well as the prime time TV. The award is approximately 16 inches tall and weighs about 12 pounds!

In the Screen Actors Guild Awards, the stars dress up in the best possible way to attend the event. Almost every Hollywood star attends the SAG awards and the audience gets to see new, charming and stylish clothes worn by these stars. Most of the time, the attire worn by these stars in these awards is what sets the new trend.

The SAG awards 2020 was a big hit. There were many stars who were so beautifully dressed that they became the spotlight of the awards. Some of the best-dressed stars whose attire was highlighted by the audience include Scarlet Johansson, Sterling K Brown, Cynthia Ervio, Jenifer Lopez and a few more. Hollywood Jackets is here to tell you about the wonderful attire of the evening.

Scarlet Johansson who is most popular for her role as the Black Widow in the Marvel Universe has blasted the minds of her fans and colleagues with her beautiful attire for the SAG awards 2020. She is the presenter and double nominee for her role as the lead actress in Marriage Story and her supporting role in the movie Jojo Rabbit. The beautiful actress came to the SAG awards in a custom teal silk Armani Prive gown along with draped pleating at the bottom side of the dress. The beauty of the dress lies in the open back with crystal embroidered straps. The beautiful look was styled by Molly Dickson and the glitter of the attire was with the help of the jewelry by Taffin. 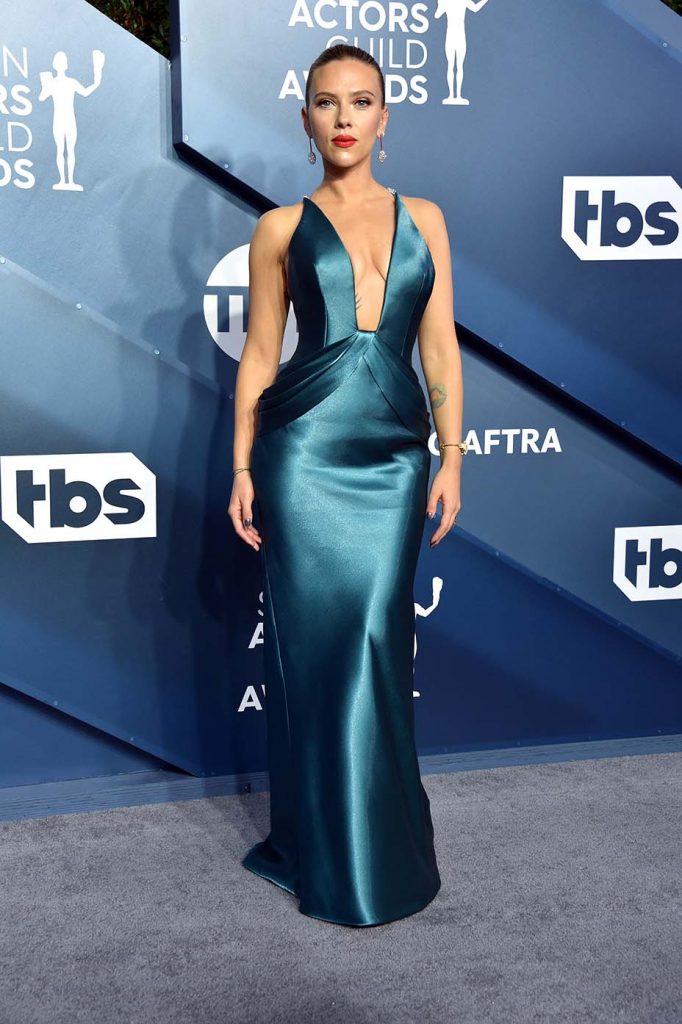 The 2019 drama and action movie were led by the actress Cynthia Rovio. The attire of the gorgeous star on the evening of the SAG awards was styled by Jason Bolden. The star slew her look in a custom Schiaparelli haute couture gown along a draped bustier top in red color. The skirt of the dress is a thick skirt in a shocking pink color of silk faille along a dramatic train. This amazing attire was designed by Daniel Roseberry. Cynthia wore multiple diamonds earrings along with a ring by Maria Tash. She wore a snake necklace worth $940,000 and worth over $45,000 of diamond rings. All of these beautiful accessories were by Roberto Coin. 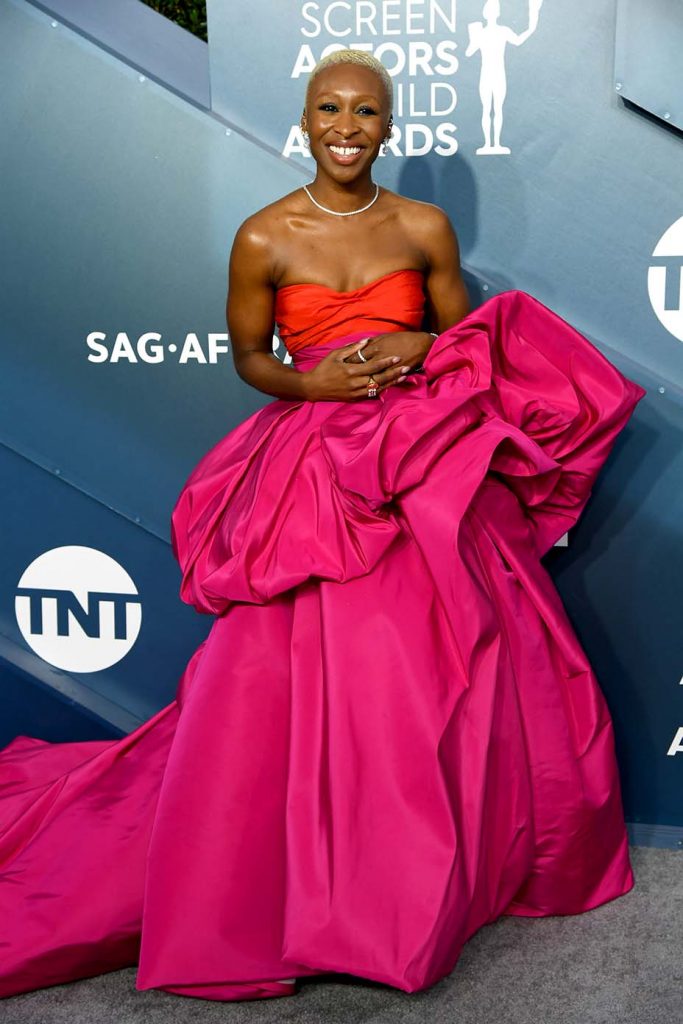 The lead star of This Is Us slew the 2020 SAG awards wearing a black and white-colored checked tuxedo jacket. The jacket had an open lapel collar and cuffs along with a white tuxedo shirt which perfectly goes with it. The suit has black trousers and a black bow tie along with it. His look for the evening was styled and helped by Stylist Naz Meknat providing him with all the accessories including a black velvet Christian Louboutin velvet loafers, omega watch, and cufflinks. 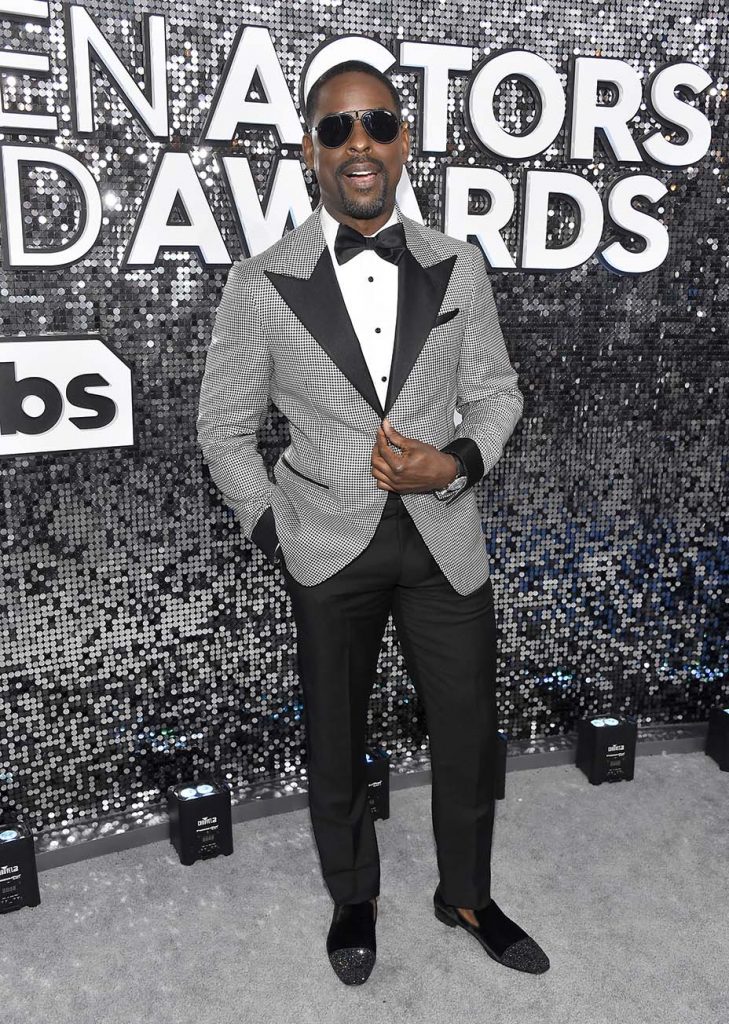 Jennifer Lopez, slaying the stage like always was dressed in the most elegant manner with the help of the dynamic duo, Rob Zangardi, and Mariel Haenn. She wore a charming, black colored, strapless George Hobeika dress with a train along with a black clutch by Tyler Ellis paired with black satin heels by Casadei heels. The star wore diamond jewelry worth $9 million. 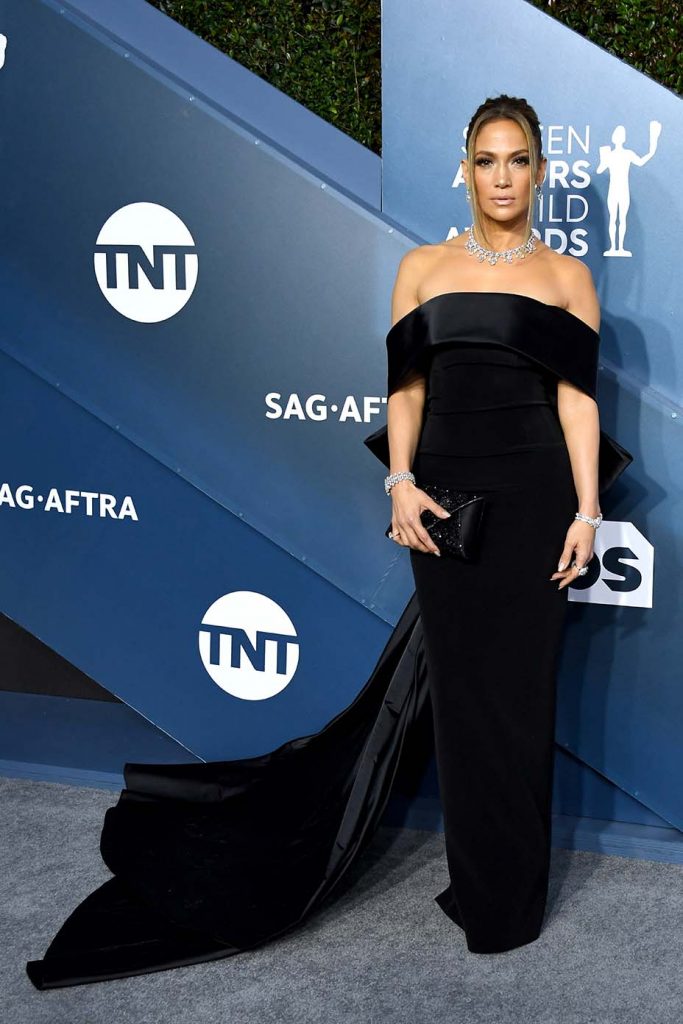 The Celine dress by Heidi Slimane looked amazing on Reese Witherspoon. She wore a one-shoulder gown with a high slit. The gown was fully embroidered in crystals and black sequins. The accessories were styled on her by Petra Flannery. Reese wore the accessories of Harry Winston which included diamond rings, bracelets, earrings, and strappy Celine shoes. 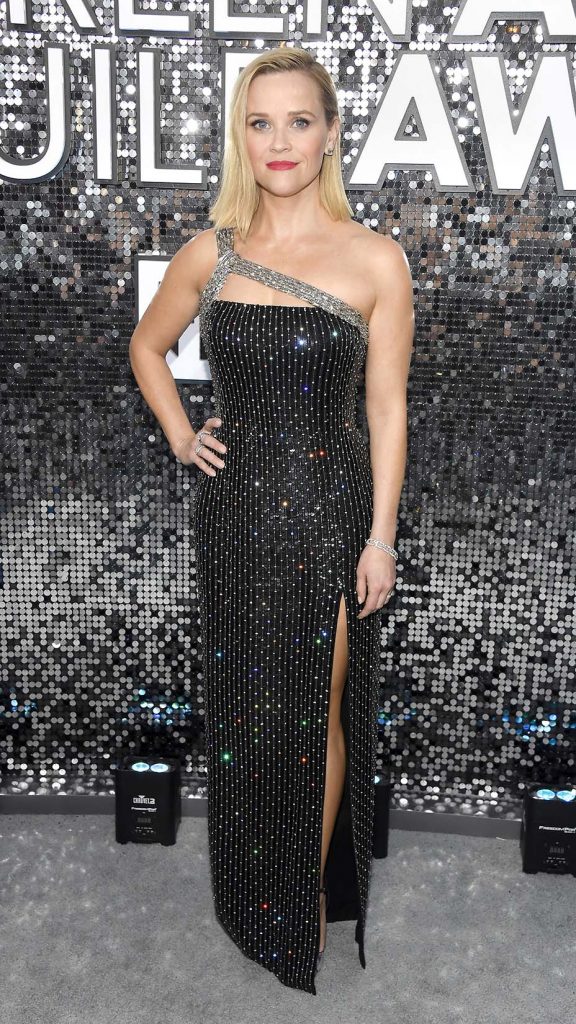 The look of Noah Schnapp was styled by Philippe Uter. The star wore a baby blue Balmain tuxedo with a matching cummerbund with a perfect white buttoned shirt along with white Balmain sneakers. 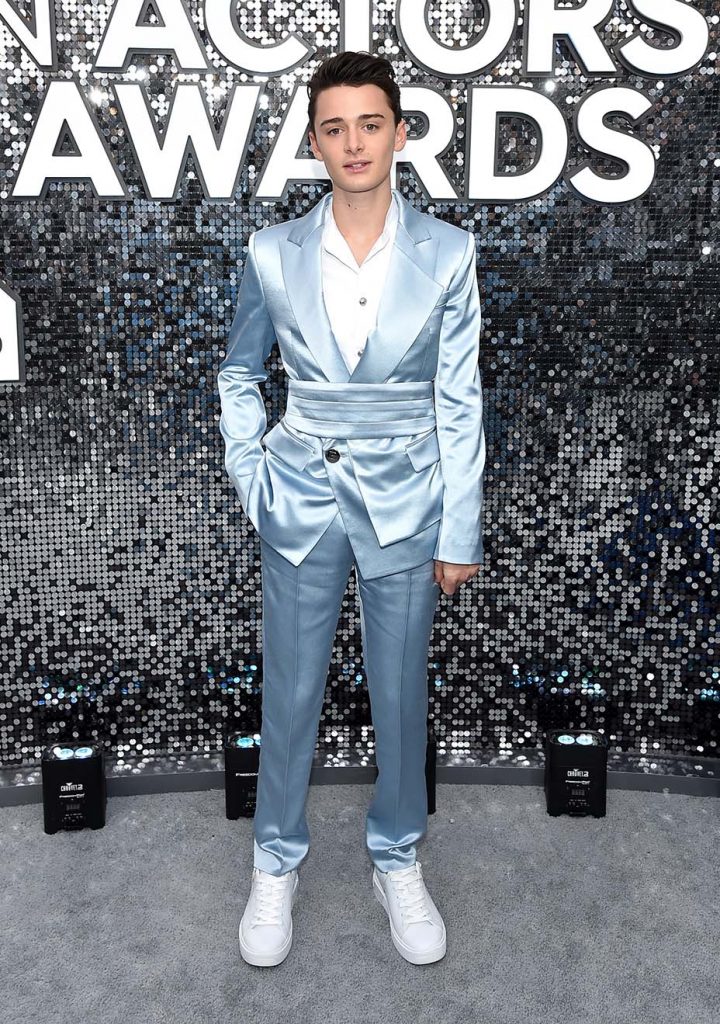 Petra Flannery slew her look in the charming customized Maison Margiela midnight blue satin haute couture column gown. The gown has a bustier top by John Galliano and this look was paired with pumps by Jimmy Choo. For the glitter on the look, Renee wore a Cartier Paris Nouvelle Vague bracelet, amethysts, pink opals, smoky quartz, and diamonds.

The gorgeous look of Laura Dern was highlighted by her bold shoulders in a custom Stella McCartney gown along with a circular chain. The look of Laura was designed by Cristina Ehrlich. In addition, the Christian Louboutin gold leather slingback pumps added sparkle to her look. She wore worth $11,000 diamonds by Tiffany & Co. 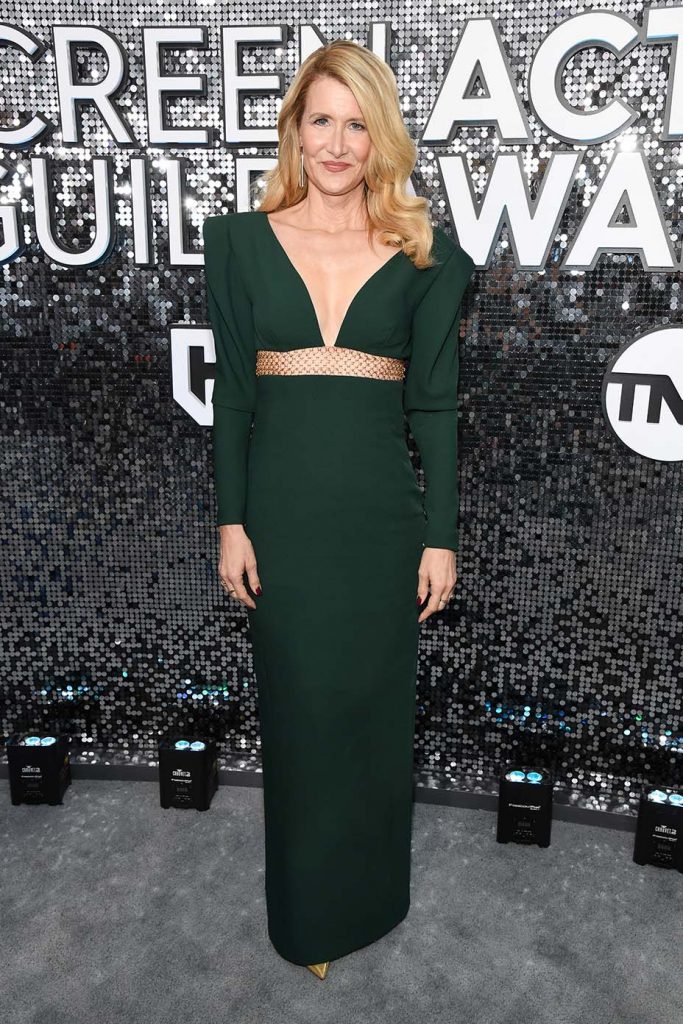 The gorgeous look of Dakota Fanning with styled by Samantha McMillen. She wore this amazing sea-foam green Valentino dress which had a unique keyhole cut out in the gown along a sheer panel on the back of the gown. Her look went to the top list, thanks to her rings and earrings by Fred Leighton and Sophia Webster heels. 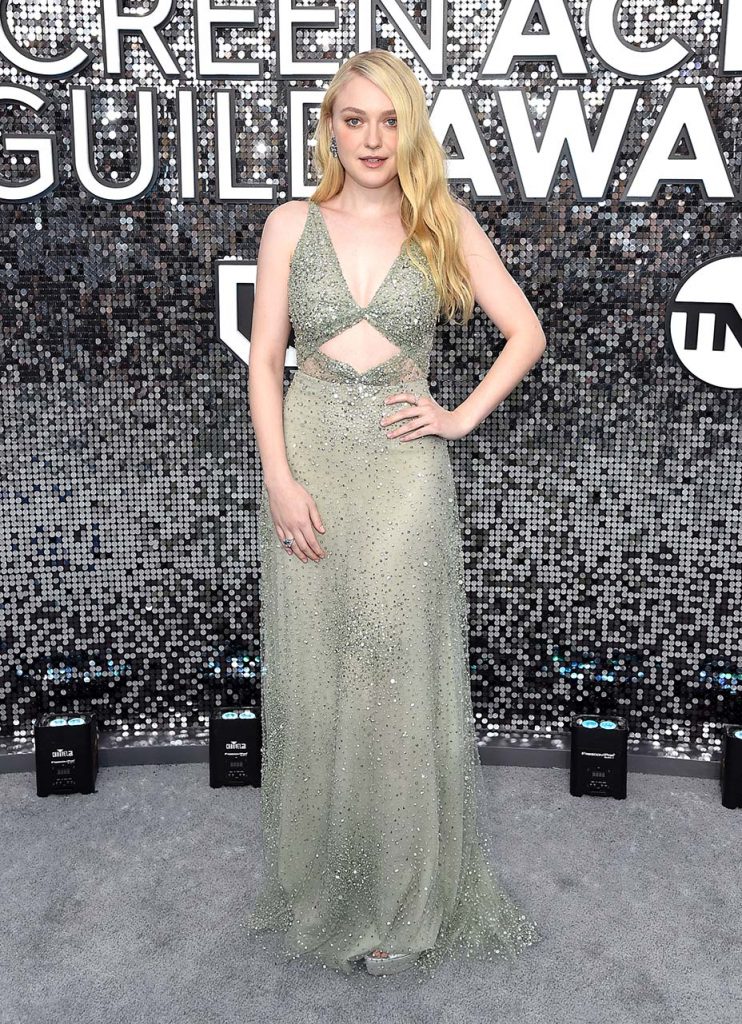 The look of Nicole was styled by Julia Von Boehm. Her impeccable walk on the red carpet was in a sequined gown with long sleeves made by Michael Kors Collection. It has a ruffled, thigh-high slot. She wore a black leather Riviera sandals with colorful Swarovski crystals. 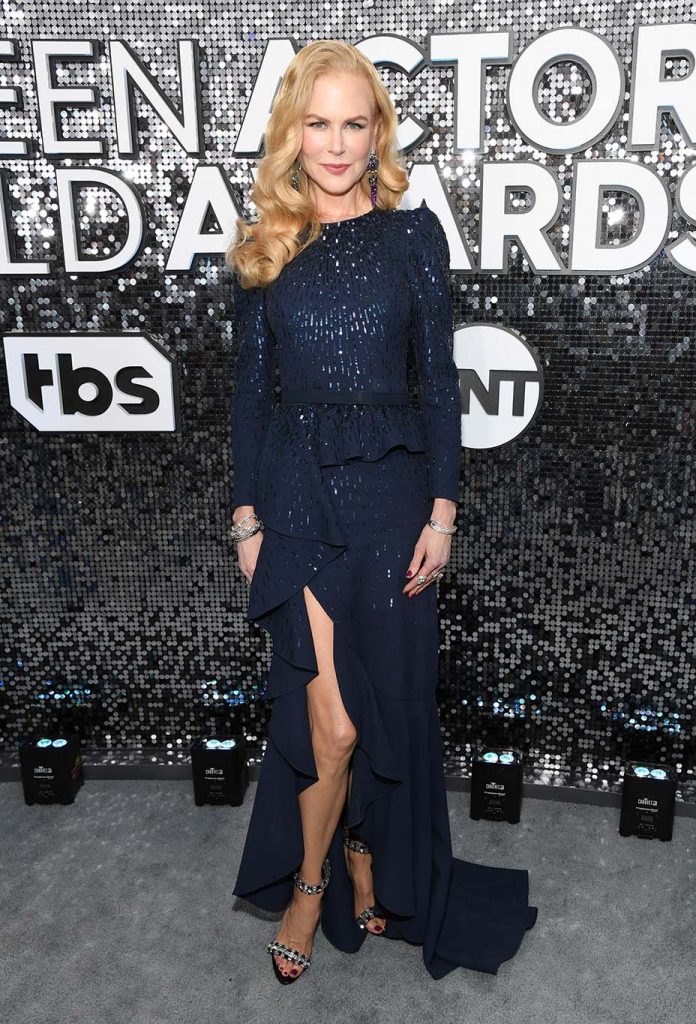